In the article above, the Lynx UK Trust are quoted as stating that the proposed 10,000 square mile area in Argyll and Inverness-shire can accommodate a population of 250 Lynxes (or is the plural of Lynx "Lynx", I'm not sure?).

This is because wildlife and conservation management cannot have monocular vision. It can never be just about the Lynx. It will also be about other rare (or reintroduced species) such as Capercaillie or pine martins, but equally about every other species, rare or not; even the deer, which are currently seen to be so populous as to be a pest.

As soon as you encourage the growth of a population of a species in an ecosystem "because there aren't enough", you immediately have to start staking steps to establish when there are "enough" and formulate a system for what to do when there are "too many". Conservation management is about balance and balance is never static - it always has to be maintained. 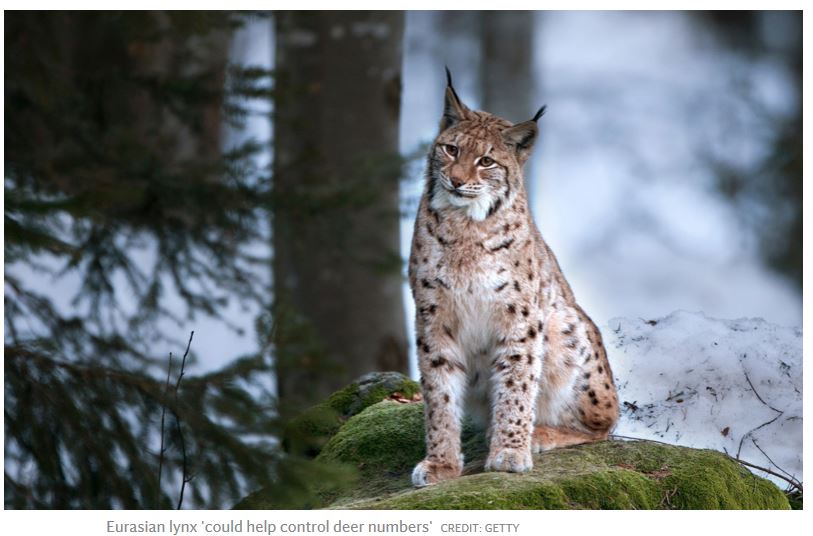 And this is where the double-standards of which I speak will inevitably arise. Now, at the inception of the exercise, when it's all about the Lynx, it's easy for the proposers to say that they will help "control the deer" - and no one really thinks about that, because it's all about the big pussy cats and there aren't many of them and there are lots of deer and, oh, well, it's all natural, isn't it?

So the idea that deer "need to be controlled" goes through on the nod, without anyone really thinking about it. But, in 10 or whatever years' time, when it's the deer that need protecting from the expanded Lynx population, then the idea that the Lynxes might "need to be controlled" just as much as the deer did will be met with screams of indignation from the animal rights lobby - especially as this control will inevitably be done by men with guns, who enjoy shooting as a sport, rather than by the reintroduction of bears (although, that said...).

There is also the usual double-standard of thinking that something that involves an animal suffering in some way doesn't matter if it can be dismissed as being "natural". Release Lynx into a wood in Scotland to control deer and that's "natural" and to be admired. Release a pack of staghounds into a wood on Exmoor to do the same thing (although with potentially less suffering as the Exmoor deer is shot rather than being killed by tooth or claw) and that is apparently an abomination. It's not. It's the same thing. The only real difference is that there is much less chance of the hounds causing "collateral damage" by killing off other species of wildlife (and, indeed, domestic livestock).

And finally, there is the foggy thinking in the claims that Lynx are shy, retiring creatures who will be too timid and secretive to prey on domesticated livestock. I've got news for you: so are foxes. Your average young, fit fox would be perfectly happy holding down a nice territory well away from man, where there are plenty of small mammals, birds, invertebrates and berries for it to eat without ever needing to go near man or his doings (although there will always be the occasional opportunistic killing).

The problem comes when the population rises and there aren't enough small mammals and invertebrates to go round and the older fox is pushed off his territory by a younger, fitter rival and has to go further afield for his food and the vixen is short of food for raising her cubs. That's when the predation on domestic livestock rises.

The same will happen with Lynxes and at some stage they will need to be controlled for the benefit of both other wildlife populations and the farming community - and that must be taken into account and allowed for right from the beginning of the project and, in particular, understood by our politicians and the media.