There are too many people living in poverty in this country, having to rely on Food Banks to feed themselves and their families. The best answer is to make sure that there are sufficient jobs paying sufficient wages so that no one should need handouts.

But, building a job-rich economy is a long-term project - and in the meantime, people must feed themselves an their families. There are many charities that have been established to do this, one of which is The Country Food Trust, which produces food and donates it to people in need.

Sir Ian Botham recently agreed to provide the Trust not only with 10,000 pheasants, but also £40,000 in cash to help turn them into casserole and curry.

Was this a good thing? Not according to a certain proportion of the media.

Sir Ian was asked to go on Radio 5 Live, supposedly to talk about the Trust, but that turned out to be not what they really wanted. They were much more interested in the opportunity to attack fields sports than in the work of the Charity.

Then, The Guardian decided to join in. 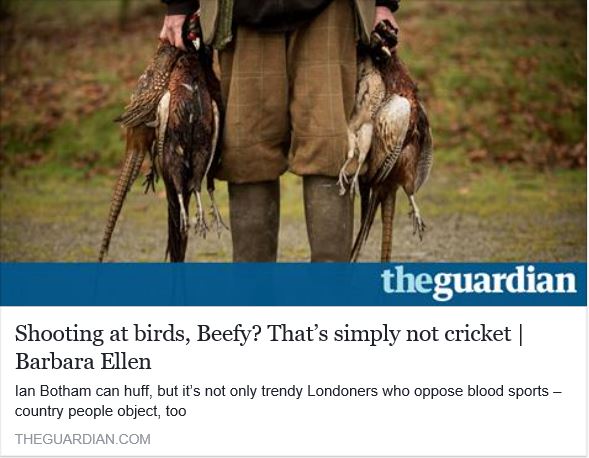 Once again, we see the usual animal-rights misconception that the claim that a majority of people oppose something does not make them right or the thing wrong, plus the, as usual, completely unsubstantiated claim that the majority of rural people are against shooting as well as those in towns.

It is all indicative of the animal rights movement's increasing targeting of shooting as well as hunting.